Hey, Peyton Manning here with a Snapchat of your Wildcard Weekend NFL picks, brought to you by “Elway”, the official marijuana of the Denver Broncos.

While I don’t smoke marijuana myself, several of my teammates do and those guys are more fun to be around than that doofus, Papa John. For the record, I became a scholar of performance-enhancing marijuana eight years ago.

During the first part of the past 420 weeks, I studied marijuana because there was nothing to do in Indianapolis. And then I moved here and I became involved in the legalization campaign. Yes I did. How do you think it passed? I can sell anything. 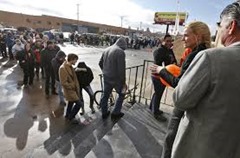 Anyway, I’ve learned that while some brands can cause lethargy or mind-numbness, I know for a fact that more than half of the touchdowns scored in the NFL were helped in some part by Elway. John Elway was the greatest quarterbacks in NFL history. He is my boss.

Elway is winning weed. I’m Peyton Manning, and this is all on Shapchat in case I’m wrong about these NFL picks, as if that’s whatzgonnahappen.

CHIEFS AT COLTS – While Andrew Luck deserves to thought of as the next anointed great quarterback, Alex Smith is going to have the biggest clutch moment in this game. Jamaal Charles will have most of the other big moments for the Chiefs. Plus, get this, the Chiefs defense will get a big interception late. I am just reporting from the future. Don’t blame me if the future is wrong. Chiefs 30, Colts 27

CHARGERS AT BENGALS – It took everything for the Chargers to make it to the playoffs. If it hadn’t have been so hard last week, they could have gone on a roll in the playoffs. Instead, they are going to get rolled. The Bengals are simply a better team, and I reserve the right to change my mind. Bengals 27, Chargers 10.

49ers AT PACKERS – Okay, everyone in America say this together so no one will say it again this weekend: “On the frozen tundra of Lambeau Field….” Now that that is out of the way, this might come out as advertised – a battle of two heavyweights. But I am thinking it’s more like middleweights. You know, Tommy Hearns versus Marvin Hagler. Great stuff, but still not Ali-Frazier. But enough with the boxing imagery. I see Aaron Rodgers throwing a late haymaker. Packers 27, 49ers 24

BYE AT PATRIOTS – Bill Belichick receives his playoff shipment of Eye of Newt.

BYE AT PANTHERS – Cam Newton saves a child from a burning building.

BYE AT BROWNS – The Three Stooges – Larry, Moe & Curly – find their coach. His name is Shemp.

This column is sponsored by snow shovels.